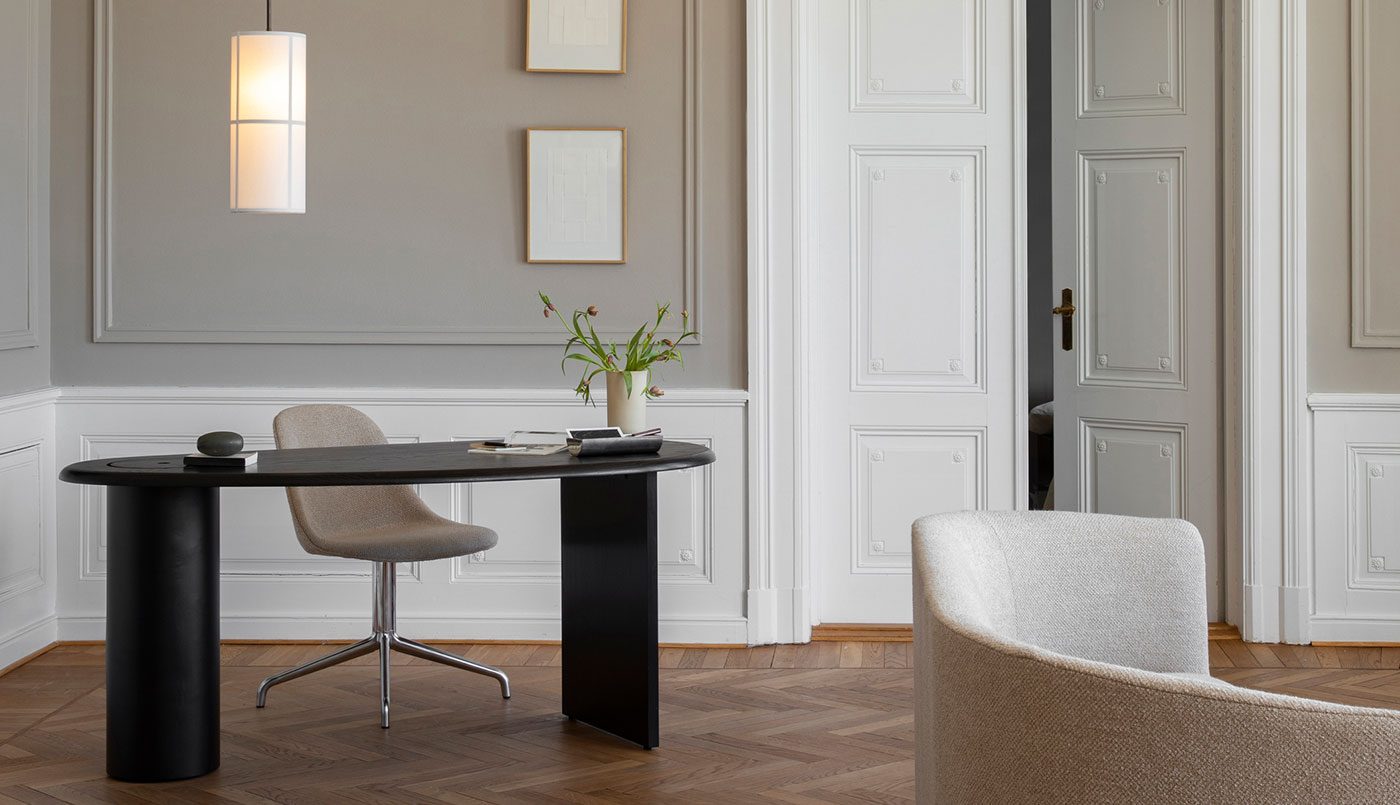 Dorset born designer Fred Rigby has teamed up with Danish design brand Menu to create a desk for modern living. A functional desk that appears as a clutter-free sculptural object in an office or space commandeered as a work-from-home station.

Rigby notes that anything from a scrap of paper or sketching forms can bring him inspiration but for Eclipse, the standout influence is nature. In particular, the shapes and forms of pebbles he would collect on the beach as a child.

“I wanted to create a design that wasn’t static, and one which was bold in colour yet tactile in form” notes the designer, adding “The Eclipse Desk is ambidextrous: it can stand in the middle of a room as a centrepiece or up against a wall as a more conventional piece of furniture. Its solid oak top and intriguing form draw the eye and invite to touch.”

With stunning, organically formed tabletop resting on a sturdy flat leg and a round steel column, this distinctive table adds a sense of drama to any room, but thankfully that doesn’t come at a cost in the form of functionality. Crafted in solid dark oiled oak, the sweeping tabletop is fitted with a lid that lifts to reveal a hidden storage bucket in the metal column leg, helping to keep the desk clutter-free and ensuring that this desk is just as much a workspace as it is a design object.

Not surprisingly, this was the designer’s toughest task. When quizzed on the challenges he faced Mr Rigby revealed it was find a way to successfully integrate the lid into the desktop so that the grain chases through the top.

The Eclipse desk is beautiful – that much is obvious. However, it’s when we consider the process and thinking behind a design like this that we truly come to appreciate the work.

First Rigby looked to the end-user – the how and where of the Eclipse’s use. As he says himself “the most important thing is how it will look and function in a space and pairing the two is key“.

The design process itself starts with sketching – crude line drawings that develop into more detailed elevations and plans before becoming models and maquettes and, finally, full-scale prototypes.

And really it’s this that we love so much about truly authentic, original design. The care and attention to detail, every step of the way. And remember, this is all before it’s expertly crafted by the team at Menu.

The Eclipse Desk from Menu is officially available to order now at Utility Design.